I have found that utilizing Nutrition Response Testing? along with Chiropractic gets better results with my patients. I would like to share two of these cases, since the results had a profound effect not only for the patients but for their family as well.

I had a young boy that came in to my practice who was in a special preschool. ?He was 4 and he had been diagnosed with autism.

He was an extremely picky eater. ?His mom couldn?t really get him to eat very much and he was on a very limited diet. ?He was very bright although he did have some behavioral issues.
The mother brought him in to see me. ?Upon completing an initial analysis, I told the mother right away, ?Nutrition Response Testing has had success with these types of cases in the past and I feel your child would also benefit.?

Through Nutrition Response Testing I found that his gall bladder had some nutritional deficiencies. ?My analysis called for recommending for him to take gall bladder support in the form of whole food supplements.

I wanted to find the underlying cause of this boy?s situation. I had theorized that maybe he had not been able to absorb fat well because the function of the gall bladder is to secrete bile which assists with the absorption of fat. ?I was thinking that maybe if he wasn?t absorbing fat for most of his life it was affecting his brain function because the brain needs fat to function properly. 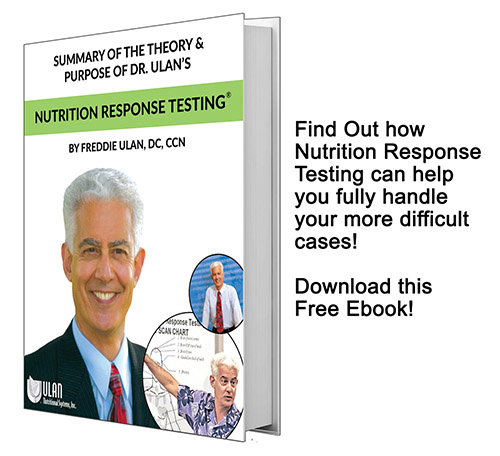 So, his body received gall bladder support. I waited a little bit and then recommended some fat supplements and sure enough his behavior changed. ?He calmed down quite a bit and shortly after that his mother came in to my practice and told me that the school told her that they did not think he was autistic.

Another case I am reminded of happened when in 2011, I had a 4-year-old boy come into my practice who had been diagnosed with autism. The mom had reported that his behavior changed drastically shortly after he received a series of vaccines at age two.

One of his most difficult behaviors to deal with was severe hyperactivity. He would run around the room and talk loudly about things that didn?t ?make sense.? He seemed to be attempting to communicate but he couldn?t formulate sentences in a way that others could understand.

The Nutrition Response Testing analysis revealed some immune challenges with his body.

I recommended a gentle heavy metal detox program as well as some whole food supplements, to support the body?s own healing process.

After 6 months the mom called me in a panic because they wanted to take him out of his Special Education class at school. She told me, ?They want to kick him out of the Special Ed school that I have him in because he doesn?t qualify anymore.? ?She was literally freaking out. She wasn?t ready for it. It happened so quickly.

That?s the typical story though. We find what we find and recommend nutritional support or lifestyle guidance and then suddenly the child is not qualified for whatever special class they were attending. This has occurred many times over the years that I?ve been doing Nutrition Response Testing.

But the amazing thing about Nutrition Response Testing is that, whatever is causing an issue, we do an analysis and we can determine what to recommend to assist the body?s own healing process. And this way, we are able to offer hope in many diverse situations.